Who We Are: Staff Stories

Submitted by Tyson Smith, Assistant Director of Administration at GHCC.
I think I wanted to be an actor for as long as I can remember.  There is just something about performing, or even watching someone else perform, that makes me feel spectacular.  Growing up in Utah, though, I knew that if I wanted to have a future in acting, I was going to have to move to the east coast.  And so, two years after I got my college degree in Theatre Performance, my partner and I decided to move to Baltimore – a smallish, kind of artsy city, close enough to Washington and to New York but with a reasonable cost of living.
To get a job, you need a local address, and to get an apartment, you have to have a job, so after a month of trying to make the advance planning impulse pay off, we just decided we were going to have to physically get here, or this move we had planned would never happen.  So, we picked up everything we owned, put it in a rental truck and drove across the country.  We got to Baltimore at about 4:00 AM and after sleeping for 5 hours in a motel, signed up for temporary job placements through Kelly Services.  That gave us the reference we needed to find an apartment, and three days later, we were living in Cherry Hill.
My intention was to act, obviously, but since moving across the country had taken every single penny we had, I needed to work a temp job for a while.  My first placement fell through even before I worked my first day, and then my second placement was at Greater Homewood Community Corporation.  Before I had even worked for three hours, I could tell that this was a very special place.  The scope of work I saw going on was incredible.  The dedication of these community activists, AmeriCorps VISTAs, full and part time staff members and volunteers was something I had never experienced before.  But I had to know – what made them all want to make this part of Baltimore better?  Why do this and not something else?
Now, three years and (almost) one month later, I think I have a good answer to that question.  We work here, we volunteer here, we spend our lives here, because we believe in Baltimore.  We believe in the people of this city, we believe in the city itself.  And when I caught that vision, it made me realize something.  If I had been an actor, I would have spent my life marketing myself at auditions and in front of audiences.  But because I was lucky enough to accidentally get a temporary job placement at Greater Homewood Community Corporation, I was given the opportunity to participate in vibrant, innovative and meaningful initiatives which make a positive impact on the world.  That is something I never even knew was possible, but it makes coming to work every day worth it. 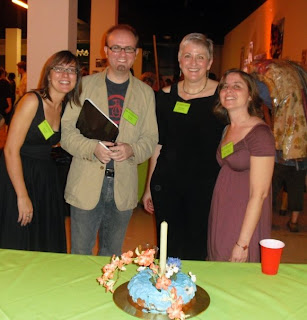