VISTA: A Legacy of Service

Throughout April, we heard a number of stories from current and former AmeriCorps*VISTA members.  VISTA is a national service program dedicated to eradicating poverty in the United States.  VISTA members sign on for a year of full-time service, receiving a modest stipend to offset the basic costs of living.  Here, GHCC’s VISTA Supervisor shares what he learned from his recent experience at a reception for the 45th anniversary of VISTA in Washington, DC.
We are still recruiting VISTA members to serve at GHCC beginning this August!  If you would like to serve, visit our website for details.
Submitted by Tyson Smith.
I’ve served as GHCC’s VISTA Supervisor for about 18 months now.  Although my role is pretty administrative—managing paperwork, attending meetings and so on—I have developed a real affinity for the AmeriCorps*VISTA mission.  There’s something really inspiring about national service, and even though I’ve never taken my turn to serve the country in this way, I’m glad I’m in a position at GHCC where I can support the individuals who are serving.  That’s why, when I received an invitation to attend a reception for the 45th Anniversary of VISTA in Washington, DC, I gladly accepted. 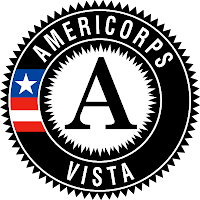 At the reception, officials from the Corporation for National and Community Service (CNCS)—the government entity that runs VISTA—including CEO Patrick Corvington and Acting Director Paul Davis, thanked former VISTA members and praised the spirit and national impact of VISTA over the past four and a half decades.  Hyepin Im, of the CNCS Board of Directors, spoke about VISTA members in recent years whose work had garnered millions of dollars to support impoverished families and communities impacted by the housing market collapse and economic crisis.  Clearly, VISTA has become an integral part of our nation’s strategy for fighting poverty on many levels.
What I found most impactful, though, were the stories shared by three guests of honor who have had a lifetime of experience with VISTA.  Lynda Robb, daughter of Former President Lyndon Baines Johnson, spoke about the day her father launched the VISTA program and the lunch she attended with the very first group of 20 VISTA members.
Senator Jay Rockefeller from West Virginia spoke about his year of VISTA service over 40 years ago in the Appalachian Mountains, and of the great impact that experience had on the course of his life. 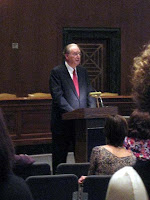 Maybe most impressive was the story that Representative Gwen Moore from Wisconsin shared.  Rep. Moore was a single mother living on welfare in Milwaukee when her neighborhood applied for VISTA funds to establish a credit union in their community.  She was encouraged to work on that project as a VISTA member, and as a result Rep. Moore became very well educated about finance, lending and other money matters.  Rep. Moore was honored as the VISTA of the Decade for 1976-1986.  Years later, she is sitting on the House Finance Committee.
Sometimes we think of VISTA as a means to an end: to build a program, to address an issue, to fill a need.  What I learned last Wednesday was that VISTA is much more than an opportunity.  VISTA is a legacy of service.  It can change the course of lives.  VISTA is an incredible way to make a difference in the country, and in one’s self.  I am honored to be a part of this movement and I am so excited to share this experience with the lucky 10 individuals who will join GHCC’s new VISTA team this fall.
Photo courtesy of Federico Santi/Volunteers in Service to America: A Personal Journey.
Share
0