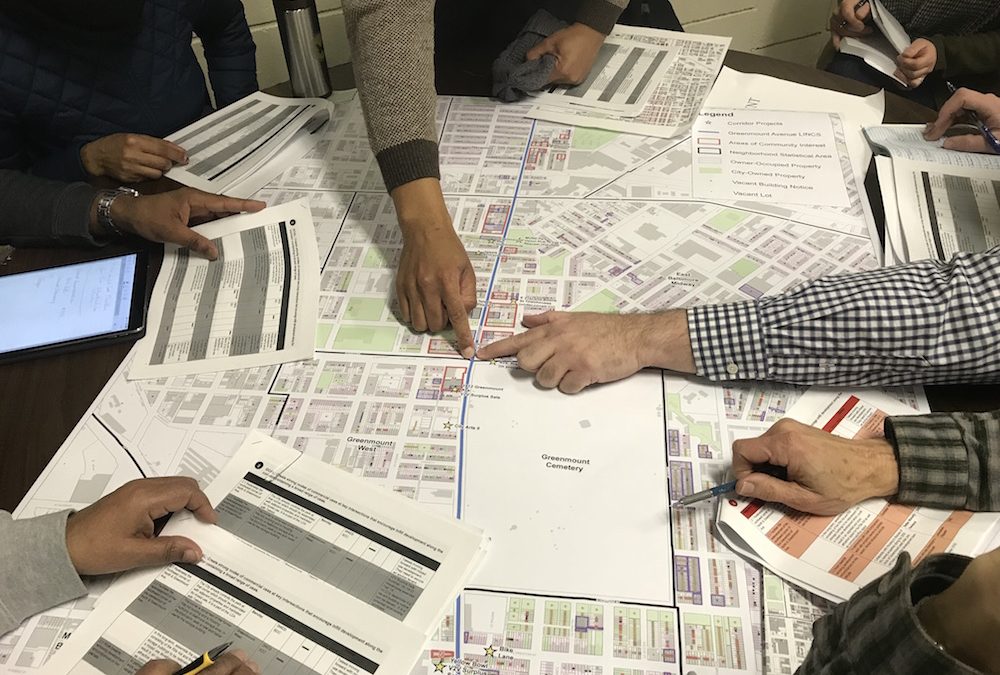 Greenmount Avenue is one of Baltimore’s most important north-south corridors. It once was a thriving hub of commercial activity and civic life – and could be so again, thanks to investments the city is making and the advocacy work of community members and Strong City Baltimore. Greenmount touches several neighborhoods where Strong City has done neighborhood and school-based organizing work – including Harwood, Barclay, and Greenmount West – and is just a mile from our future East Baltimore home at the Hoen Building in Collington Square.

After Strong City suggested corridor planning for Greenmount Avenue, Baltimore City launched the LINCS program (Leveraging Investments in Neighborhood Corridors) in 2015 to revitalize some of the city’s most important traffic corridors, starting with Greenmount. Because of Strong City’s long history of involvement with the Greenmount neighborhoods, we were selected as the lead engagement partner, ensuring that community voices would be heard and that the city agencies implementing LINCS would be responsive to local needs.

“Strong City was instrumental in going out to the community, getting people to meetings, and setting priorities,” according to Marshella Wallace from the Baltimore City Planning Department.

Although progress has been incremental so far, the LINCS plan is poised to take a major step forward, with many improvements about to go into effect up and down the 1.5 mile target area between 29th and Eager streets. LINCS neighborhoods were updated on the plan Saturday, February 2, at St. Matthew’s New Life United Methodist Church in Barclay, at a community meeting convened by the Rev. Eric Lee, Strong City’s Director of Neighborhood Programs and a pastor at the church. Officials from the city Planning, Transportation, Housing, and other departments attended the meeting, along with several dozen neighborhood leaders and residents.

As Reni Lawal of the Planning Department explained, “Greenmount Avenue often is viewed as a barrier, not a connector. We want our corridors to be viewed as connectors where people feel comfortable walking along Greenmount, stopping at a store or restaurant. That’s what we want for our neighborhood corridors, but it’s a heavy lift because of so many years of disinvestment and lack of coordination, which we are trying to correct.”

In 2015, the Urban Land Institute-Baltimore (ULI) issued a report outlining the following goals for the LINCS Implementation Strategy on Greenmount Avenue:

On Saturday, Marshella Wallace reviewed some of the completed improvements, including the beautiful new façade and sidewalk replacement project at the Greenmount Recreation Center in Barclay; the sale of underutilized city-owned property at 1812 Greenmount Ave. in Greenmount West to Ernst Valery Investments Corp.; and the lifting of peak hour parking restrictions throughout the LINCS area. Ms. Wallace also noted that the new citywide zoning code generally supports the land use strategies recommended in the ULI report. Other recent improvements include:

The following upgrades/improvements are expected to be implemented soon:

As city officials and Strong City push forward with LINCS, neighborhood leaders are also taking action on their own. A Greenmount West Community Association representative announced the receipt of a small grant for a community project to improve public space on Greenmount between North Avenue and Hoffman Street. They will be working over the summer with MICA and the Baltimore Design School on projects such as decorating benches and painting.

Strong City is working with the Harwood Community Association and local developers to revitalize the small section of the neighborhood located east of Greenmount Avenue. More than 15 properties have been acquired for rehabilitation or demolition, and 10 of them are under rehab. The stakeholders are also working together to rezone properties along Greenmount Avenue for uses desired by the community. The ordinance needed to rezone this small area has a Planning Commission hearing scheduled for February.

The next quarterly meeting for the Greenmount Avenue LINCS Implementation Strategy is Tuesday, March 19, 1 p.m. at the Baltimore City Department of Planning, 417 E. Fayette St., 8th Floor. All who are interested are welcome to attend.