Know someone interested in making positive changes in the world? GHCC is seeking qualified candidates for our nationally-renowned AmeriCorps*VISTA program.  Sign on for a year of service with us and receive health benefits, a modest living allowance, and an end-of-service education award.  We have 10 positions available to start in August 2010 in the areas of improving public schools, strengthening neighborhoods, and adult literacy.


We’ll be featuring several VISTA stories in the coming weeks to raise awareness of national service.

Where do you come from?
This has always been an entertaining question for me, mainly because there have been a lot of stops along the way to where I am.  Born in Colorado, lived in Vermont and a few places in New Hampshire, went to high school in Massachusetts, and finally college at Goucher, in Towson, MD.  While all these things made me who I am, it was Goucher College that landed me in Baltimore, if only because I didn’t want to go home and didn’t have reason to go anywhere else. 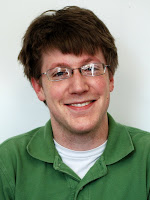 What made you decide to be a VISTA?
It happened accidentally, really.  I had made it three and a half years at Goucher without completing the internship necessary for graduation in my psychology major.  I wasn’t particularly interested in doing the standard psych hospital internship, so I wound up with Read-A-Story/Write-A-Story, a program one of my professors helped start.  The after-school program partners Goucher College students with students at Dallas F. Nicholas, Sr. Elementary School for afternoons of reading and ultimately writing books each semester.  I thought they would simply want me to participate, but as it turns out, they were badly in need of a director.  So, having never done anything akin to this, I filled the need.  The job entailed all of the planning, hands-on management, and general problem solving that made Read-A-Story/Write-A-Story tick (with a lot of help from the staff), but most importantly involved scheduling with the current GHCC VISTA placed at the school.  Through these interactions and some lengthy conversations, I got a much better idea of what VISTA actually was and meant.


Why did you choose Baltimore/GHCC?
As graduation approached I, like so many students in my year, was having difficulty finding a job with any meaning.  Conveniently, the VISTA position at Dallas Nicholas came open in August.  Having some experience with the school, its staff, and a few folks at GHCC, I wound up being chosen for the position.  It also fit my goals, as I was beginning to feel I had been doing too much self-service and needed to give back.  VISTA provided me an opportunity to do that, in a forum that I had some familiarity with, and in a city that had begun to feel as much like home as anywhere else.


How has your experience influenced your life and work?
That year of VISTA has influenced my life an awful lot thus far.  Not only did I begin to develop an affection for the city of Baltimore (which, being a country boy until college, was a big step), I bought a house here and wound up working for GHCC following the end of my VISTA year.  Nowadays I can be found upstairs and to the left at GHCC’s 3503 N. Charles Street office, working to strengthen neighborhoods in north central Baltimore by building capacity in schools and communities.  If that isn’t VISTA influenced, I don’t know what is!