“It Takes Just a Little Love”

Dallas F. Nicholas, Sr. Elementary School held its Annual Sports Day Festival on Friday, May 22nd. There was a terrific parent turnout starting right at 7:30 AM to help set up and it continued straight through the end of the afternoon until everything was cleaned up. Beyond that we had great staff support and were visited by some current and former Goucher College students. During the day we were also assisted by two groups of students from the Success Academy who helped us marshal students to and from their races.

Two local community organizations, Greater Greenmount Community Organization (a local neighborhood group) and Greater Homewood Community Corporation, hosted tables at the event. In addition to the traditional athletic events, this year’s Sports Day grew a little bit with the addition of an academic component: a Math and Language Arts competition held in February at Goucher College. The event and months leading up to it now encompass not only athletics, but encourage students to prepare for their MSA Tests and study every night, as well as act appropriately during the school day. All points accrued at the Academic Competition and awarded for good behavior are then added to the totals from the Sports Day Festival, where the winning house is decided. 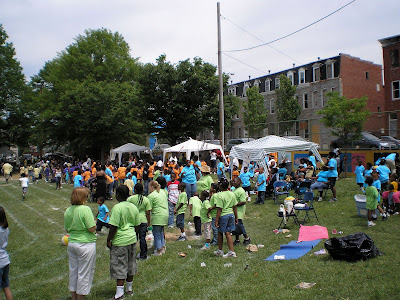 Medfield Heights Elementary School held their first Sports Day Festival on Thursday, May 21st! Medfield picked up on the tradition of Sports Day from a fellow GHCC partnership school, Dallas F. Nicholas Sr. Elementary School, and we plan on making it an annual tradition.

Sports Day was a great event that was only made possible by support from a team of people at Medfield Heights, including the principal and leadership team, who coordinated the event planning; the house captains, who each stepped up to lead 70 students to form a house team; the gym teacher, who helped all the students practice for all the events throughout the spring; the PTA for serving lunch; and for all the wonderful parents and community members who were able to come out and cheer for our students!

We were even lucky enough to have City Councilwoman Mary Pat Clarke make a guest appearance as one of the five Maryland icons honored with a house name. The other houses were the Dr. Alonso House, the Benjamin Banneker House, the Harriet Tubman House, and the Francis Scott Key House. The house names were voted on and chosen by Medfield’s fifth grade class. They did research projects on a number of Maryland’s historic icons as well as icons currently serving our state, and voted on who they wanted to honor on Sports Day with house names. In the end the Dr. Alonso House took first place for the day, but the Francis Scott Key House came in a close second.
Overall, it was a great day, and everyone — students, parents, faculty, staff, and community members — were able to come together and celebrate the school year with a great day of competition and fun outdoors!