Waverly’s New Principal Gets a Warm Welcome from the Community 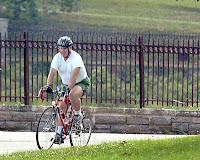 It is with heavy hearts that Greater Homewood Community Corporation (GHCC) acknowledges the death of a Board Member, John Richard “Jack” Yates. Our deepest sympathies and prayers go out to his family in this difficult time.

“Jack’s death in a cycling accident is a tragic loss for all citizens of Baltimore,” said Randy Knepper, GHCC’s board president. He worked tirelessly as an advocate for children and youth and, until his recent return to graduate school, as secretary to the board of GHCC where he served since March 2004.

Jack had the heart of a social worker and worked closely with at-risk youth before he retired from the Maryland Department of Juvenile Services. He also served as a mentor and facilitator for Baraka School alumni with the Educational Opportunities Program (EOP) at Lake Clifton High School from 2001-2008. With funding from the Abell Foundation (where he acted as an Educational Consultant), he counseled disadvantaged young men from Baltimore City Public Schools when they returned from two years in a Kenyan boarding school to begin high school.

EOP founder, Robert Bonnell, described Jack as “extraordinary with those youngsters” – something current Director, Shelton Skinner, echoes, remembering him as “fantastic.” Skinner points to Jack’s focused commitment, recalling how he often drove his students to and from almost every high school in Baltimore.

Closer to home, Jack served on GHCC’s Youth Development Initiative board committee and helped lead our efforts to offer quality opportunities for children and youth. Much like his colleagues here at GHCC, Jack believed that all children deserve a quality education, a vibrant neighborhood, and the access to enrichment programs that build skills for academic success.

GHCC will honor Jack’s memory by hosting our second annual cycling Tour de Greater Homewood this fall, with all of its proceeds designated to GHCC’s Youth Programs.

Velocipede Bike Project, in conjunction with Ghost Bikes – an international biking organization dedicated to memorializing fallen bicyclists – will remember Jack by placing a white bicycle with a small plaque on the corners of Lafayette and Maryland this Sunday, August 9th, at 6:00pm. All are welcome to attend.