Light Up the Night on Waverly Main Street 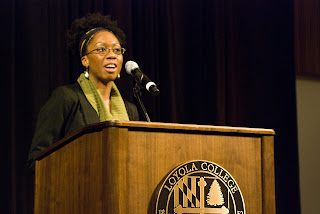 GHCC appreciates all of the nearly 2,000 dedicated volunteers who help us strengthen neighborhoods in north central Baltimore. We recognize one particularly outstanding volunteer every autumn at GHCC’s annual meeting and awards dinner. The GHCC Volunteer of the Year is often an individual whose service has touched multiple programs in the organization, and this year’s winner is no exception.
Regina Boyce was born in Washington, D.C. and raised in Rockville, moving to Waverly about four years ago. She became active in her local neighborhood organization, the Waverly Improvement Association, and has served as its vice president for nearly a year. She describes the neighborhood as “very eclectic in style, very eclectic in its people, eclectic all the way around.” A tireless Waverly booster, Boyce has participated in a number of projects that have promoted that sense of place and neighborhood identity, including Real City, Dream City with Art on Purpose and Maps on Purpose. Using art and mapmaking as means of representing Waverly “showed that Waverly is a lot stronger than people looking from the outside might think,” she says.
GHCC has gotten to know Regina Boyce through activities sponsored by its Neighborhood and Economic Development program like clean-ups and the National Night Out Kick-Off Parade on Greenmount Avenue. But the organization’s Public Education staff also worked with her to advocate for funding to expand the building and curriculum at Waverly Middle School. Boyce was part of a coalition of partners, including the Cathedral of the Incarnation, the Franciscan Youth Center, and Better Waverly Community Organization, that successfully campaigned for the school. “We all came together and said, no, this is not adequate enough and we want more for our children,” she recalls. The state approved the funding for the school in May.
Click here to find out how you can join Regina Boyce and hundreds of other volunteers who support GHCC.
Photo by Jaclyn Paul
Share
0