Just in Time for Christmas, a New Computer Lab for Waverly School

Reflections on a Year of Service: George Shardlow

Last week, GHCC said goodbye to a VISTA member who has brightened our days at the office since November 2009. George Shardlow isn’t going far, though: he’ll be staying in Baltimore working on transportation issues, so no doubt he’ll be hearing from us on a regular basis.
We first met George on Greater Homewood Voices last February, but we caught up with him again to hear his perspective after a full year of service. 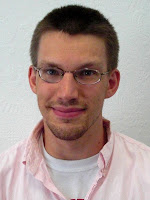 You’re a Minnesota native and went to school in Iowa—what brought you all the way to Baltimore?
I was pretty intent on getting out of my parents’ basement. I started applying to every VISTA position that seemed in line with my interests. The posting for my current position popped up and seemed quite intriguing.
A Google image search for Baltimore yielded pictures of vacant houses, which struck me as sufficiently different from suburban Minnesota to constitute a legitimate adventure—of course, I’ve since discovered the city’s vibrancy. GHCC called me back after I applied and the next thing I knew, I was on a plane to “Bawlmer.”

Tell us a little bit about your educational background and study abroad experiences. How have they helped you in your VISTA service?
All too often, study abroad is marketed as an opportunity to experience something “foreign.” For me, the most enriching part of the experience was being foreign. You have to develop a comfort level with the fact that you’re different from everyone around you. The unfortunate reality is that many people are unable to acclimate to that environment. I’ve always been sort of odd—even back in Minnesota—so I was never all that upset about being a “gringo.” You learn to not take yourself too seriously and to laugh at all the uncomfortable disconnects.
I say all this simply because there is an extent to which a lot of VISTAs, myself included, are strangers in a strange land. You enter a community you know nothing about and, in the beginning at least, people are not entirely sure what to do with you. I’ve had a lot of fun moving from neighborhood to neighborhood developing a rapport with the residents I met there.
All the clichés about everybody being the same on the inside ring true, but it’s undeniable that there are plenty of quirks between us. Apparently, you Baltimoreans don’t use the word “folks,” as in “how are you folks doin’?” It’s just baffling to me. I’ve enjoyed being a quirky, Nordic oddity and have learned a lot from being here.
Was VISTA your first choice coming out of college? What other options did you consider? How did your family feel about you moving halfway across the country to do a year of service?
As a Political Science major, my first choice was to have someone pay me to just sort of make profound observations about an assortment of topics—turns out that’s not really how it’s done. Always a generalist, I was open to any number of options. In May 2009, the month I graduated, there were a slew of magazine articles harping on the worst job market since post-War Germany, which was certainly…uplifting. VISTA seemed like a good option because it welcomed entry-level applicants at a time when I would have been competing against PhDs to get a job flipping burgers at McDonald’s.
It was also appealing to dedicate myself to something other than just making money. By the time I applied in November 2009, the bailouts were in full swing. The image I was getting of corporate America was of greedy, entitled white dudes who screw up and then rob the American people.  I have since moderated this view and, through the course of my service year, become keenly aware of the importance of the private sector for building vibrant communities.
How did my family react? They were supportive. I think they understood that it was time for me to get out of the Midwest and they were happy to see me doing something worthwhile. My father is known for what you might politely call “dark humor,” so my moving to the city where they filmed The Wire provided no shortage of fodder for one-liners—one-liners, it turns out, many Baltimore natives are not entirely fond of. Several members of my family have been out to visit and they have all come to love this city as I do.
Every VISTA year has its ups and downs. What was the toughest thing you had to go through, and what/who got you through it?
There were several points when I did not feel like I was on the front line, per se. I doubted the importance and impact of what I was doing. Indirect service is necessary work, but it’s not always as gratifying and the results are not always immediately apparent. I had to remind myself that community organizing is a marathon and not a sprint and that every little bit helps.
What accomplishment are you most proud of from your year?

We’ve set up a series of monthly workshops called the Neighborhood Leaders Forum for community activists. It has been a great way to inform neighborhood leaders about the issues affecting their communities. We have gotten a lot of positive feedback and it looks like they will continue to take place after I leave.
Many GHCC staff members got a chance to appreciate your sense of humor during your tenure here. What memory will make you laugh every time you think of it?
A group of staff and VISTA members ran in a mud run in Rockville, Maryland, dressed in brightly colored, full-body spandex suits we ordered online from a Chinese wholesaler. We were pretty much the most popular people at the race and even got interviewed by the Washington Post. Maybe you saw it. It was in section Z, two pages after the profile of Mrs. Salahi’s hairdresser.
That has nothing to do with combating poverty, but it was the highlight of the year.

Give us the outsider’s perspective—when you moved here, what surprised you most about this city? What do you think is its biggest strength?
What was most surprising for me was seeing the stark racial and socio-economic differences between neighborhoods. I’d never had the experience, before coming here, of walking just one block and finding myself in a completely different world. That said, I love the fact that each neighborhood has such a strong identity. Summers in Baltimore are a blast. Not a weekend goes by without a street fair somewhere in this city and each one puts its neighborhood’s flavor on display.
Baltimore’s biggest strength is its pride and sense of self. People are proud to be from Baltimore, and I can see why. There is a certain tough-luck-kid-chip-on-your-shoulder element to it, but more importantly there’s just no place quite like Baltimore. I like that my neighbors sit on their porch and say hello as I walk by. There is a real sense of community within each neighborhood, even at times when bonds across neighborhood lines are not readily formed.
I hope people don’t take this the wrong way, but above all else I think Baltimore is a great place to be weird. I don’t know that I could ever fully articulate what I mean by that, but I know that I love that about this place.
If you could say just one thing to people starting a year of service, what would it be?
Stick with Natty Boh. Resurrection is delicious, but you’re living in poverty and you need to come to terms with the fact that you can’t afford it. Lay off Chipotle for the same reason.
Share
0