Strong City Baltimore is getting a new home, but its mission is the same 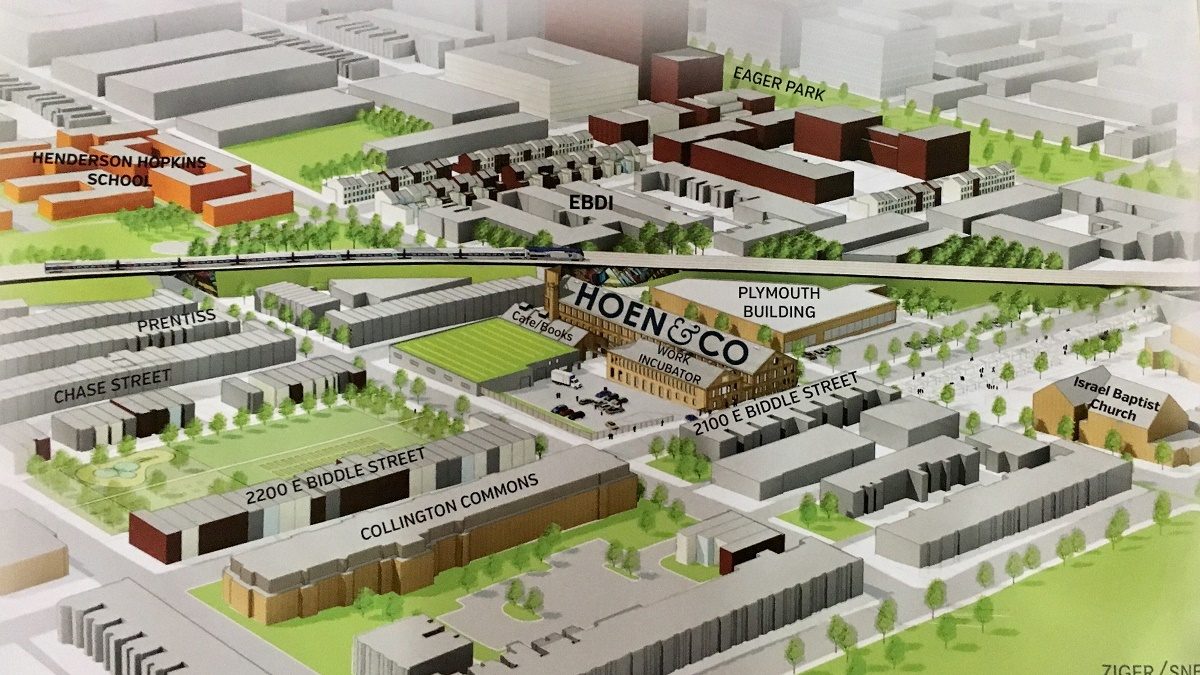 After 50 years in Charles Village, the grassroots nonprofit Strong City Baltimore is opening a new chapter in its history. As of January 6, 2020, the organization well-known for its community building, adult education, and fiscal sponsorship programs will anchor the newly renovated Hoen Lithograph Building in East Baltimore’s Collington Square neighborhood, part of the greater Broadway East area.

“For five decades, Strong City has found innovative ways to support neighborhoods and their leaders,” said CEO Karen D. Stokes. “We believe we can be a force for good in East Baltimore, not because we have all the answers but because we understand the questions when it comes to neighborhood development. We have a long history of working alongside local residents to help them achieve their vision of positive community change.”

The abandoned 85,000-square-foot Hoen complex was an eyesore for nearly four decades, after the printing company that owned it went out of business in 1981. The nearly $30 million project involved 18 separate sources of funding to leverage federal New Market Tax Credits. It represents a major economic investment in a section of Baltimore that has suffered from decades of neglect but may now be on the cusp of a renaissance.

Collington Square neighborhood leader Ella Durant, a member of Strong City’s Board of Directors, recalls visiting the Hoen Building on school outings, when it was thriving and supported hundreds of middle-class jobs for local residents.

“This is a wonderful neighborhood, but what’s missing has been real investment,” Durant said. “I think this could be the start of a major turnaround for Collington Square.”

Besides Strong City, the occupants will include Associated Builders and Contractors-Baltimore, which is consolidating its training facilities at the Hoen complex; Cross Street Partners, the project’s lead developer, which is relocating its offices from Canton; and City Life Community Builders, a workforce training-focused nonprofit.

By bringing activity and investment back to this section of East Baltimore, the Hoen project has transformative potential. The partners in this effort envision a “Center for Neighborhood Innovation” in the complex, bringing together nonprofits, entrepreneurs, and visionaries in a shared space serving the neighborhood and city with workforce, educational, and retail endeavors, as well as coworking space for nonprofits and entrepreneurs.

“For most of our 50 years, we were focused on stabilizing and strengthening neighborhoods in north-central Baltimore,” Stokes said. “But over the last decade, we have become a truly citywide organization with our Adult Learning Center, educational advocacy work, and more than 100 fiscally sponsored projects.”

A. Hoen & Co., established in Baltimore in 1835, was the oldest continuously operating lithographer in the United States and one of the most prolific such companies in the world. In its early years, the company specialized in precise cartographic, scientific, and pictorial illustration, producing maps that were influential in westward expansion and setting national boundaries. In the 20th century, its products ranged from world-famous National Geographic Society maps, to baseball cards, to labels for products such as Chunk-E-Nut peanut butter. Hoen occupied the building from 1902 to 1981.

The Hoen Building renovation was made possible by robust support from the city and state, which together have provided $5.7 million in grants to date (in addition to $3 million in State Historic Tax Credits). Many city and state leaders were forceful advocates for the project, including Maryland Secretary of Housing and Community Development Kenneth C. Holt and Baltimore Housing Commissioner Michael Braverman.

Strong City Baltimore, founded in 1969, is a grassroots nonprofit whose mission is building and strengthening neighborhoods and people in Baltimore. It believes that Baltimore is strengthened by supporting community-based initiatives and leaders through direct programming and fiscal sponsorship. A full list of direct programs can be found here. A full list of fiscally sponsored projects can be found here.