As Baltimore Corps goes independent, looking back on an extraordinary partnership

Middle-School Students From Guilford and Walter P. Carter Get a Taste of College Life at Loyola University Maryland 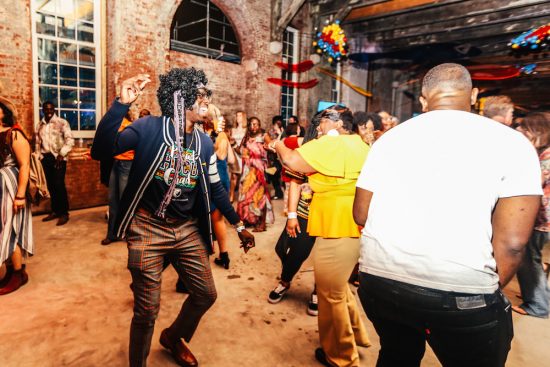 Strong City launched its 50th anniversary year in style on May 4th, as hundreds of guests enjoyed Get On Up!, a 1969-themed party in the unique space of the Hoen Lithograph Building, our future home in East Baltimore. Jonathan Gilmore and The Experience, top local DJs, a costume contest, a 007 martini contest, great local food and drinks, pop-up experiences, a photo booth, a silent auction and more kept visitors entertained throughout the night. The interior of the building was transformed by local artist Corynne Ostermann to resemble the inside of a giant lava lamp.

The winner of the 007 martini contest sponsored by the Baltimore Bartenders’ Guild was Brendan Dorr.

Get On Up! also kicked off Strong City’s $1 million Capital Campaign. You can become part of the effort to finish construction, buy furniture, and make the Hoen Building a community hub for East Baltimore by making a special 50th birthday donation at https://strongcitybaltimore.wedid.it/.

This event, the most ambitious in our history, would not have been possible without the efforts of many dozens of people and organizations.

While it would be impossible to name everyone who played a part, the following deserve special recognition:

Get On Up! is over, but the celebration continues! Strong City’s upcoming 50th anniversary events include our “Sneaky Social Justice” Film Fest in August at The Parkway; “Strong Voices, Strong City,” a choir concert in September; a Light City/Baltimore Book Festival panel on neighborhood change in November; our 12th annual Neighborhood Institute; and a Collington Square Block Party. More details to come, so keep an eye on future newsletters, our Facebook page, and our website.