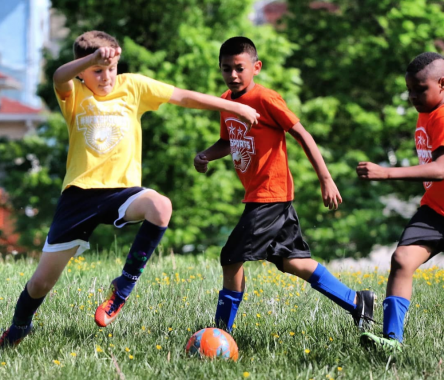 Kevin Anderson didn’t begin with the goal of starting a nonprofit to bring afterschool athletics, structured recess, and wellness programs to Baltimore City schools that were lacking those programs.

Anderson wasn’t interested in splitting his time between schools on different sides of the city, so he began thinking about how he could best put his love of wellness, athletics and child development to work on behalf of Baltimore City students. He came up with an idea to “fill the gaps in terms of wellness and athletic programming for elementary and middle schools in the city, because there’s a huge need.”

As a former public school and college athlete himself, Anderson was well aware of all the benefits that children receive from participating in sports: not just improved physical health but intangible values such as character building and teamwork. And yet, when he looked at the Baltimore City Public Schools, he found that options for elementary and middle school students to play sports were extremely limited – the main opportunity being a middle school basketball program capped at 30 teams, whose membership rarely changed.

Anderson took a grassroots approach to developing his program, visiting dozens of city schools to sell individual principals on the value of his idea. Many principals wanted what he was offering, but their staffs were stretched to the limits. So Anderson knew he had to make things as easy as possible for the schools. “We take care of everything – uniforms, transportation, all the logistics, all run through an app,” Anderson explains. “When a school signs up with us, all they have to come up with is a coach.”

As a vendor providing intramural afterschool sports to 75 schools last year, NEWFit has a presence in about half the elementary and middle schools in the city. Another 10 schools use NEWFit’s customized, structured recess program, which emphasizes safety and fairness, communication and conflict resolution skills, positive self-talk, and effective transitioning between activities.

NEWFit offers schools a wide range of afterschool athletic activities that vary by season, much of which can fit seamlessly with a school’s standard, academics-based afterschool program. In addition to staples like basketball, football, soccer, and volleyball, they now offer alternatives such as boxing and yoga, and are working on launching a lacrosse program.

Having younger students play intramurals brings obvious benefits – as well as some less-expected ones. Anderson has seen children’s behavior and attendance improve as a result of the program, but he has heard of potentially hostile situations between groups of youths that were defused when someone recognized a person in the other group who they had competed against. Adults have opportunities to develop themselves as well: A custodian at one school led her basketball team to three championships and is proud of the fact that the kids all call her “coach.”

Anderson points to the fact that 88 percent of NEWFit schools have renewed their contracts with him, and 94 percent sign up for more than one sport. Still, most schools in Baltimore City are financially constrained and can’t afford to meet the needs of all students who want to play. Anderson wants to be able to fully serve those schools, which is a big reason why he signed up with Strong City as a fiscally sponsored project.

“The idea is to be able to provide this to every kid, every school, regardless of financial status,” Anderson says. “Now, with the relationship with Strong City, we can pursue grants, pursue tax-deductible donations, develop a fundraising plan for different streams of revenue so we can say to principals, ‘We have these additional funds to supplement your program, so your kids can have opportunities all year round.” He also looks forward to building relationships with other fiscally sponsored projects whose missions are related to health and wellness.

The “NEW” in NEWFit stands for Nutrition, Exercise, Wellness, and the program’s early years included creativity and wellness-based summer programs, as well as a home economics-style class focused on healthy habits. NEWFit has hosted healthy living/cooking workshops at various schools for both students and staff, and next year will offer a cooking and character class focused on social-emotional components, character building, and leadership development.

Anderson is frank about using physical activities as what he calls a “Trojan horse” for his larger agenda of building character and promoting social and emotional health in younger kids. “My brothers and I, all three of us played sports, and the things we learned transcended sports,” Anderson says. “Diligence, accountability, camaraderie, resilience. … Getting good at a layup is a lot like getting good at conjugating verbs. I feel like, by not giving our kids access to these things, we’re doing them a disservice by not giving them these auxiliary experiences – the life skills that come with sports.”