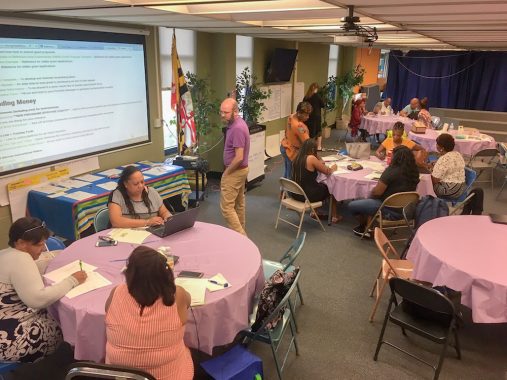 Strong City recently expanded on its already strong relationships with Baltimore’s Judy Centers – early childhood programs housed in a number of Baltimore City Public Schools. Last month, we held an orientation for six Judy Center Coordinators who were either starting a fiscally sponsored project with us or receiving new services.  Strong City now supports Judy Centers at seven elementary schools: Liberty, Arlington, Curtis Bay, Harford Heights, Moravia, Arundel, and Eutaw Marshburn; and one elementary/middle school, Commodore John Rodgers. The relationships with Liberty and Commodore John Rodgers are longstanding ones, while some of the others are more recent.

Strong City supports Judy Centers through the fiscal sponsorship of “Friends of” groups at the centers,  helping them to access flexible and responsive human resources, purchasing, and an avenue for fundraising.

“Judy Centers are a really important part of the resources available to families, and we have found a number of ways where the quality and breadth of that programming can be enhanced through Strong City’s fiscal sponsorship of these ‘Friends of’ groups,” says Tyson W. Garith, Strong City’s Director of Operations. He describes the connection between Strong City and the Judy Centers as a “five-lane highway” because the relationship facilitates the success of the Centers in many different ways – one of which is the ability to do independent fundraising, as Commodore John Rodgers did two years ago after its playground was destroyed by a fire. Judy Centers with fiscally sponsored projects also have more flexibility and choice in where they purchase supplies, which helps Coordinators to do more with their budgets.

Strong City has a long and varied history of supporting public education in Baltimore, including co-founding the Baltimore Education Coalition, serving as lead agency for a number of Community Schools, and focusing on schools in our neighborhood organizing work.  Judy Centers are similar to Community Schools in that both focus on wraparound services, parent engagement, community input, and eliminating barriers to success.

“We have supported schools since the beginning of our organization 50 years ago, and Baltimore City Public Schools is a longstanding partner of ours,” says Strong City CEO Karen D. Stokes.

Judy Centers are funded by the Maryland General Assembly via the Judith B. Hoyer Grant and a small grant from the Baltimore Community Foundation. Of the 54 Judy Centers in Maryland, 11 are in Baltimore City. The Kirwan Commission that is studying statewide education funding recommends significantly expanding Judy Centers in high-poverty areas.

“We would love the opportunity to expand throughout the city,” Sarah Bollard says. “I truly believe that each family in Baltimore deserves these great services, and would love to see an even greater reach throughout Baltimore.”