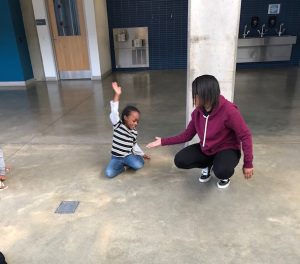 “Always, they would say, ‘Africa is poor and dirty,’” Mason-Campbell recalls. As African-Americans, she says, “What does that say about our self-esteem?” That experience is one of the reasons that her company, Guardian Baltimore, identifies “healing injured identities” as part of its mission, along with “creating a healthy culture” and “preserving community art and wisdom.”

Since 2003, Mason-Campbell has been leading what she describes as a kinetic curriculum for teaching African-American history through dance. Not only has she taught a generation of students the beauty and richness of African and African-American dance styles, but some of those students have been invited to travel and perform in professional settings, including the opening of the National Museum of African American History and Culture in 2016.

Mason-Campbell, who began dancing at Peabody Preparatory at age 5, loved the work she was doing in Sandtown, but she had a dilemma – the problem of “divided purpose.” She wanted to expand her program to more Baltimore City public schools, but she needed a funding strategy that aligned with her values. She didn’t want to have to operate a dance studio that only privileged children could afford to attend.

The solution: Moving History, which Mason-Campbell launched in summer 2018 as a fiscally sponsored project of Strong City Baltimore.

Through this nonprofit initiative, Mason-Campbell’s Afrocentric dance curriculum has come to City Neighbors High School and Henderson-Hopkins School, and she is currently in conversation with four additional schools.

A crucial aspect of Moving History’s approach is developing youth who began as program participants to become educators and leaders in their own right: designing lesson plans, receiving workplace experience, dealing with parents. One Moving History student leader who began learning from Mason-Campbell over a decade ago is now in 11th grade; another has started college. “It’s been really amazing watching the young people grow in their ability to be classroom leaders, to be professionals,” Mason-Campbell says.

Moving History received just under $180,000 this year in the first round of funding from the new Baltimore Children and Youth Fund. With that revenue, Mason-Campbell can employ a full-time staff member to work with student-teachers as the program expands to additional schools around Baltimore, “making this curriculum available to more kids across the city,” she says.

Mason-Campbell says it is important to show students that they have something to contribute and to be proud of – no small thing in a place like Sandtown, where children are typically “on the receiving end,” she says.

“Charity, altruism is important, but we have things to share as well,” Mason-Campbell says. “This program has pointed out to young people, ‘You are the expert in this area. You performed at the National Museum of African American History; you’ve been called to D.C. to teach classes.'”

Too often, Mason-Campbell says, young people of color are told they are a “drain” on society, rather than contributors. Part of her calling is to show the children of Baltimore just how wrong that notion is, by noting the immense musical and cultural achievements of African-Americans throughout U.S. history, even in the face of slavery, the Jim Crow era, and ongoing discrimination.

“For me, this has been about being able to share with young people – who would not otherwise know – about the greatness of their past and the greatness they are capable of achieving,” she says.