Completion of Hoen Project Gets a Boost With $1.6 Million Federal Infrastructure Grant 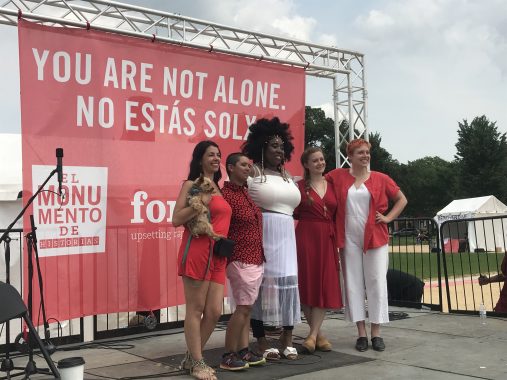 Years of work, hundreds of volunteers, and thousands of stories of trauma and survival came together from May 31 to June 2 on the National Mall in Washington with the culminating public display of the Monument Quilt by Baltimore-based FORCE: Upsetting Rape Culture. FORCE, a fiscally sponsored project of Strong City Baltimore, collected 3,000 stories by survivors of sexual and intimate partner violence and their allies, which were written,
painted, and stitched onto red fabric and displayed for the world to see. Hannah Brancato, a co-founder of FORCE, reflected on the success of the project, which she estimated drew tens of thousands of onlookers who viewed the Quilt in person and hundreds of thousands who saw it or read about it in the media. “It’s bittersweet, because we worked really hard to create this space, and it felt really peaceful and supportive all weekend. And now it’s over, and the work is: How do we create this space without having 3,000 quilts and a complicated art display that costs a lot of money?”

Kalima Young, a member of FORCE’s leadership team, added, “One of the things that is very, very apparent is, this feels like the right time to bring all of these elements together and make the magic happen. We see and can constantly feel how much work it has been. All of us feel very proud and centered around it all.”

The Monument Quilt was launched in 2013, and FORCE has partnered with over 100 organizations across the U.S. and in Mexico, to organize 49 Quilt displays in 33 different cities. However, the National Mall display is the only time that the Quilt has been displayed in its entirety. It is the first national monument to survivors of sexual and intimate partner violence.

Two women from Minnesota who gave their names as Brittany and Bonnie were impressed by what they saw. They had heard about the Monument Quilt just the night before and decided to take a look shortly before the closing ceremony on the afternoon of June 2. “It’s nice to see how spanning the project is,” Brittany said. “I saw one panel that was talking about sex work … it seems to touch on a lot of issues within the realm of sexual safety and freedom.”

Hannah Brancato shared the story of a college student named Rose Piscuskas who travelled by bus from Boston to see the quilt square she had created three years ago during a workshop in Maine. “It was incredibly powerful for me to see the immense amount of physical space that the quilt took up,” Ms. Piscuskas said. “This conversation about rape, sexual assault, treatment of victims in the judicial system, and trauma is one that is so often had in private, small spaces. It was liberating for me to see it take up so much space and demand the attention that it deserves. … I am so grateful for the opportunity to have been part of such an amazing project that has successfully created a resilient, connected, and compassionate community.”

The project has received significant news coverage, including this recent article in the Washington Post. The app that was created for the event is still live as an archive of all of the quilts and can be accessed at: app.themonumentquilt.org.

A video clip from the Monument Quilt closing ceremony can be found here.