Middle-School Students From Guilford and Walter P. Carter Get a Taste of College Life at Loyola University Maryland 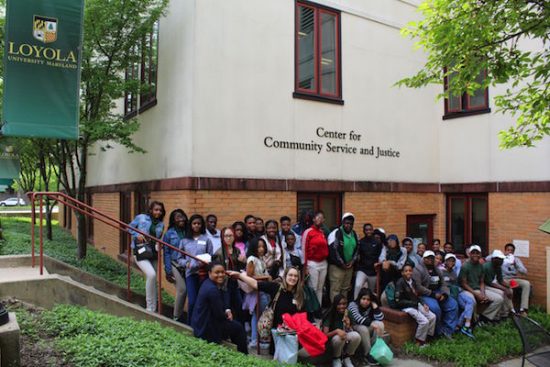 Last month, students from Guilford Elementary/Middle School and Walter P. Carter Elementary/Middle School visited nearby Loyola University Maryland. Annie Weber, Strong City’s Community School Site Coordinator based at Guilford, helped to arrange the trip, which included a mock college class, interactions with Loyola students and professors, lunch in the cafeteria, and a tour of the academic buildings and dorms. (Loyola was one of Strong City’s founding institutions in 1969, and the two organizations have been strong partners ever since.)

London Bottom, 13, a seventh-grader, wants to be a doctor or lawyer. She was impressed with the Loyola campus, which she had never visited before. “It’s a nice, free space for if you ever want to go bike riding around there, or have an early morning jog,” she says. “I liked the cafeteria – the food was good. And the dorm rooms are great.”

For Reginald Qualls, 12, the visit to Loyola – including learning about chemical interactions in a science class – changed how he thinks about his future, and may even have inspired a career goal. Although the sixth-grader is still a couple of years away from high school, he is already giving serious thought to what comes after.

“I might apply there,” Reginald says of Loyola. “Before, I didn’t really think about going to college – I thought about doing a trade. But from experiencing that [visit], I think I might want to go to college.” What would he want to study there? “Science, to be a chemistry teacher,” he says.

Tashawn Walker also really enjoyed his visit to Loyola, but one thing he noticed on campus surprised him: “They have a church there. I’ve been to a couple of colleges … I never knew colleges could have churches.” Something else Tashawn came to realize, from chatting with students in Loyola’s cafeteria, was how much independence college students need to have. “In college, you’ve got to start doing stuff on your own. You have a lot of responsibility,” he says.

“Helping to connect our students to enrichment opportunities like this one at Loyola University is something that students will remember when it comes time for them to apply for college,” Annie Weber says. “We’ve been so lucky to have such a close partnership with Loyola to help us expose students to college and career options early-on.”

Starting in 2021, students from Guilford and Walter P. Carter are scheduled to begin attending a newly built school under the 21st Century Schools program, a $1 billion school construction plan that Strong City helped advocate for through the Baltimore Education Coalition.