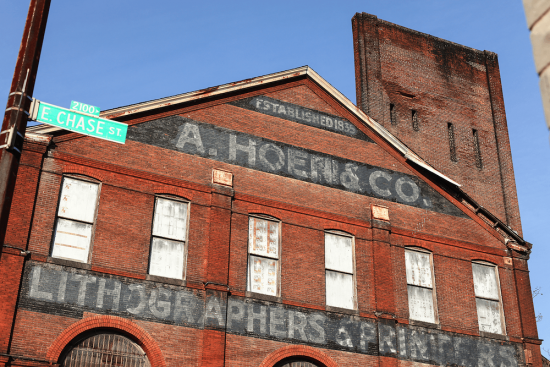 Efforts to revitalize once-thriving East Baltimore took a big step forward this week with the completion of financial arrangements to renovate the Hoen Lithograph Building in the Collington Square neighborhood. When work is completed in early 2020, the Hoen Building will house anchor tenant Strong City Baltimore, the nonprofit partner in this renovation and, it is hoped, eventual owner of the property. Other major tenants will include Associated Builders and Contractors — Baltimore, which will operate a regional training center there; Cross Street Partners, the project’s lead developer, which is moving from its headquarters in Canton; and City Life Community Builders, a workforce and housing-focused nonprofit.

The 85,000-square-foot Hoen Building has been abandoned for nearly four decades. This week’s financial closing marks the end of a years-long process that required the developers to assemble at least 11 sources of funding and represents a major economic investment in a section of Baltimore that has suffered from decades of neglect and disinvestment — but which is now on the cusp of a renaissance. The nearly $30 million Hoen project joins other development efforts in the area north of Johns Hopkins Hospital such as the human services nonprofit Humanim in the former American Brewery building, culinary incubator Baltimore Food Hub at the old Eastern Pumping Station, and the East Baltimore Revitalization Initiaitve (EBRI) plan spearheaded by Southern Baptist Church. Around the corner from the Hoen Building on Mura Street is The Club at Collington Square, a vital afterschool and summer camp program serving over 100 neighborhood children and operated by Strong City.

Georgia Smith, Chair of Strong City’s Board of Directors, says the organization’s relocation to East Baltimore reflects its commitment to “building and strengthening neighborhoods and people” going back a half-century. “There are wonderful community partners there with which we can work and support,” Smith says. “We have several programs, including our Adult Learning Center, which can offer needed services to neighborhood residents. The building itself was in need of renovation and very symbolic of the revitalizing work that we do every day with neighborhoods. The Board thought the move to the Hoen was a great way to combine our logistical need for space with the very essence of our mission.”

At its height, the Hoen Building supported thousands of jobs in a lively neighborhood of blue-collar and middle-class homes, shops, and eateries, but by the time it was shuttered, Collington Square was in sharp decline. The rebirth of the Hoen Building, by bringing activity and investment back to this section of East Baltimore, has the potential to transform the neighborhood. Strong City envisions a Center for Neighborhood Innovation at the Hoen Building, bringing together nonprofits, entrepreneurs, and visionaries in a shared space that serves the neighborhood and city with resources including workforce development, educational, and retail endeavors, as well as coworking space for nonprofits and entrepreneurs.

“For most of our 50 years, we were focused on stabilizing and strengthening neighborhoods in north-central Baltimore,” says Strong City CEO Karen D. Stokes. “But over the last decade, we have become a truly citywide organization. With our fiscal sponsorship program, VISTA program, Adult Learning Center, and educational advocacy work, Strong City touches every neighborhood of Baltimore. This move demonstrates our deep commitment to the city, especially to areas that have suffered from disinvestment and historically racist policies. And with a larger space, we will be able to increase resource sharing and capacity building with the more than 115 initiatives we support through fiscal sponsorship and fiscal management. ”

When Cross Street Partners and Strong City broke ground on the project in April 2018, the Rev. Dr. H. Walden Wilson of nearby Israel Baptist Church noted, “We can do more together than we can separately.” For 50 years, this has been our core belief at Strong City Baltimore, where forming partnerships based on trust, respect, and a shared vision has always been the key to our successful neighborhood revitalization efforts.

The restoration of the Hoen Building would not be possible without the strong support of the city and state, which together provided $2.8 million in grants (in addition to $3 million in State Historic Tax Credits). Many city and state leaders have been forceful advocates for this project. Strong City especially wishes to thank Maryland Secretary of Housing and Community Development Kenneth C. Holt, Baltimore Housing Commissioner Michael Braverman, Mayor Catherine Pugh’s office, the Baltimore City Council, and the 45th District state delegation. 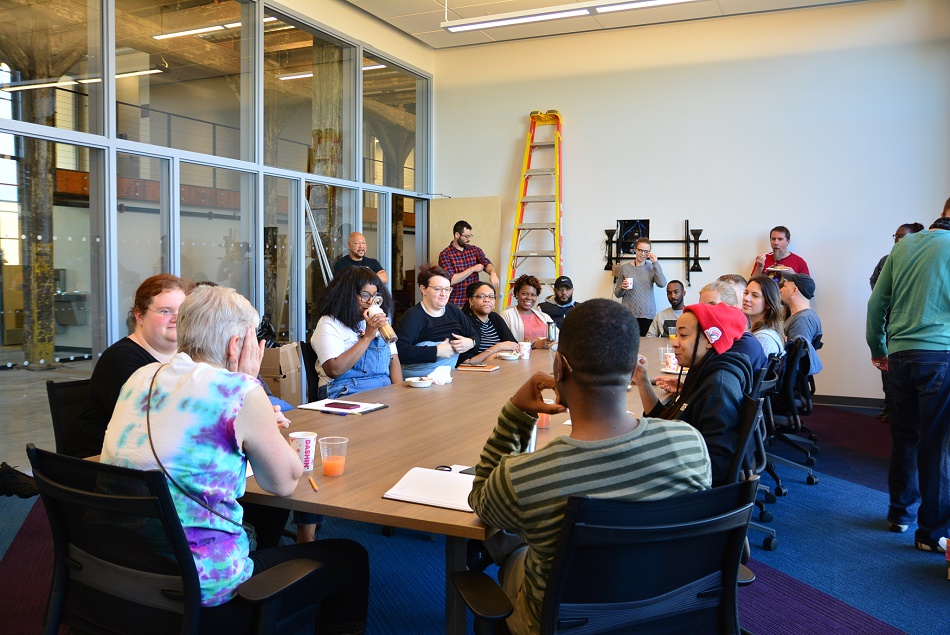