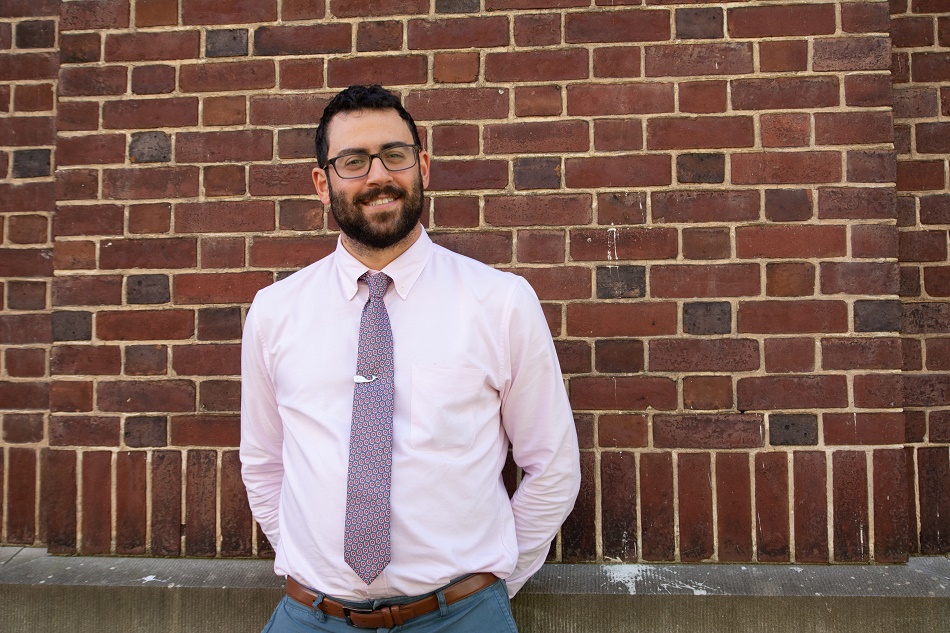 As the new Executive Director of Strong City Baltimore’s Adult Learning Center, Jesse Schneiderman isn’t going “back to school.” The fact is, he never left.

Jesse, who grew up in the New York City suburb of New Rochelle, was still in high school when he knew he wanted to be an educator. He studied history at the University of Delaware as a steppingstone to a teaching career, and followed that with an internship in Tel Aviv, Israel, working at the education office of a museum and with a nonprofit that used soccer as a teaching tool. Jesse then moved on to a master’s degree in education at Wilmington University (which is when he met his partner, Megan, who he shares a home with in Upper Fells Point).

Jesse taught high school civics for two years in New York City before following Megan to Baltimore, where she was accepted into a Hopkins program for nursing students returning from the Peace Corps. He joined the staff of Frederick Douglass High School in West Baltimore teaching history and civics there for five years and taking on a heavy load of extracurricular responsibilities, including student government advisor, debate coach, and director of student activities and school culture and climate.

Still a student himself, Jesse is currently in the final days of completing his education doctorate in Urban Leadership at Johns Hopkins University, with a dissertation on student sense of belonging. He left Douglass after the 2018-19 school year to focus more intensively on completing his degree. After he saw an ad for the Adult Learning Center, he signed up to become a part-time GED teacher, which gave him an inside look at the operations and atmosphere of the ALC.

“I realized this was a strong community, a special environment for learners,” Jesse says. “This is a warm place to be – you can feel that when you’re here.”

Jesse was thinking about what direction his career would take next, when former ALC Director Regina Boyce left earlier this year to focus full-time on her job as a state delegate. He was committed to staying in Baltimore and interested in the local nonprofit sector, but it had to be the right organization.

“I was evaluating nonprofits for authenticity of mission,” Jesse explains. “I found Strong City and the ALC to be very true to their mission. They back up what they want to do with what they actually do, so I was excited to apply.”

Jesse is joining the senior ranks of Strong City’s leadership at a pivotal moment for the organization, which in a few weeks will leave its decades-long home in Charles Village and relocate to the Hoen Lithograph Building in East Baltimore. For the ALC, this means moving out of the basement of University Baptist Church and into a more spacious environment filled with natural light that is handicapped-accessible and has modern classrooms and equipment.

“Physically, it’s a nicer space. We will have more room to offer stuff, different programming and services,” Jesse says. “And the community there needs what we can offer more than Charles Village does.”

Jesse has a vision for the ALC as a place that does more than train people in GED preparation and English as a Second Language. He wants it to be “like a Community School for adults,” with wraparound services and programs such as expungement clinics and social and health services. He wants all ALC staff and students trained on using Narcan, for example.

“Long term, I would like to have a social worker on staff,” he says. “Short term, we are going to create partnerships with organizations to do job and skills training. We are the experts in adult learning, and that means more than teaching GED and ESL.”

Jesse also sees opportunities to monetize some of the ALC’s services. Free GED and ESL classes for people who need them will continue, of course. But those who are able to pay could fund additional services for those who can’t. “We can be creative in offering classes,” Jesse says. “There’s a huge clientele at Hopkins – we can offer paid English language classes, and this way we can offer more to our learners who need it. We can be both proprietary and mission driven.”

Jesse has already been making connections with organizations that do job training, anchor institutions such as Hopkins, agencies like the Mayor’s Office of African American Male Engagement, and street-level projects like Ceasefire and Safe Streets. “Long term, I see us as a wraparound center that happens to provide classes. Short term – without the funds to do it fully ourselves – we’ll get as creative as possible with our partners.”

In his spare time, Jesse enjoys working on various social justice causes, going to the gym, watching TV, and hanging out with his partner and their dog, Waffles. He is also a sports nut – especially soccer, but also basketball, football, and baseball. (He’s a Yankees fan, but this can perhaps be forgiven as his father grew up in the Bronx.)

A runner, Jesse also plans to buy a bike for the short daily ride from Fells to the Hoen Building in Collington Square. Strong City and the ALC will officially be open for business in the new location on January 6, 2020.

“I’m really excited about the opportunity to drive this mission in a new place,” he says. “It’s not a chance you often get.”