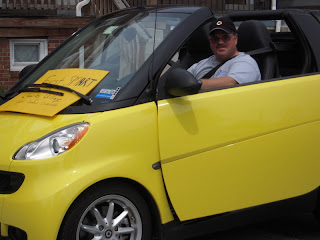 Ednor Gardens resident Brad Schlegel, who was GHCC’s 2007 Volunteer of the Year, recently received a Local Hero Award from the Bank of America Charitable Foundation! The awards recognize residents’ work in and for their communities.

The Local Hero Award honors Schlegel for his work in two Greater Homewood neighborhoods. In Ednor Gardens-Lakeside, Schlegel is a block captain, participates in Citizens on Patrol walks, and facilitates a neighborhood email list. He is also active in the Barclay/Midway/Old Goucher (BMOG) Coalition, where he chairs the group’s Public Relations and Communications committee and promotes revitalization in the southern end of Greater Homewood.

“Local hero is the perfect phrase to describe Brad,” said Joan Stanne, who nominated Schlegel and also lives in Ednor Gardens, in the TE/GE Times. “I nominated him for this award because of his persistence when locating resources to address neighborhood concerns and his continuing work to promote neighborhood communication.”

The award comes with a $5,000 donation to a nonprofit chosen by the honoree. Schlegel chose to donate the funds to GHCC, where they will support community funds specifically for Ednor Gardens-Lakeside and the BMOG Coalition.