Helping residents of north central Baltimore find the tools they need to make their neighborhoods stronger is what GHCC is all about. That’s why we’ve hosted the Neighborhood Institute for the past two years, a day of workshops on the topics that matter most to our neighbors. 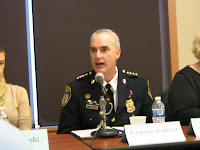 This year’s Neighborhood Institute, which was held on November 15 at the Charles Commons Conference Center, opened with a panel discussion by some of Baltimore City’s top leaders:

The panel was moderated by Joseph McNeely, Executive Director of the Central Baltimore Partnership. 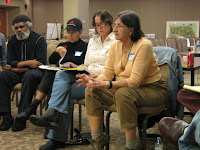 The workshops that followed offered something for everyone! Veteran community organizer Betty Robinson (pictured above) led a workshop on community organizing with Alyson Harkins of the Community Law Center. Representatives from the Parks and People Foundation, the Chespapeake Bay Trust, and the Herring Run Watershed Association offered tips for neighborhood greening projects. Other topics included drug nuisance abatement, housing code enforcement, how to run effective community meetings, and building partnerships between schools and communities.

We hope you’ll join us for the Neighborhood Institute next year! Until then, you can check out GHCC’s Neighborhood and Economic Development program for advice and ideas for your neighborhood.