Join the Early Literacy Team at Barclay Elementary/Middle School for a Year of Service!

From Indiana to Maryland: The Start of my AmeriCorps Experience

Not only was last Saturday the first official day of summer for Baltimore City Public School Students, it was the Richnor Springs Neighborhood Association’s summer kick-off block party. 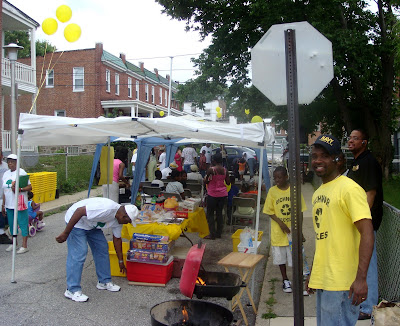 Richnor Springs wants to make sure their community is ahead of the game as Baltimore City makes this transition. The neighborhood association utilized grant money provided by the Greater Homewood Community Corporation Block Project Grant and a Cleaner Greener Baltimore Recycle More grant to address the need for increased recycling at this year’s block party. At the event, 40 lucky residents were presented with free recycling bins to assure that they are ready for July 14th. In addition to free bins, Tonya Simmons, Recycling Coordinator for the Department of Public Works was on hand to speak about the new One-Plus-One system and field questions from community members. Ms. Simmons’ knowledge of the new system proved invaluable as residents were able to learn all about the why, what, where, and when of One-Plus-One. 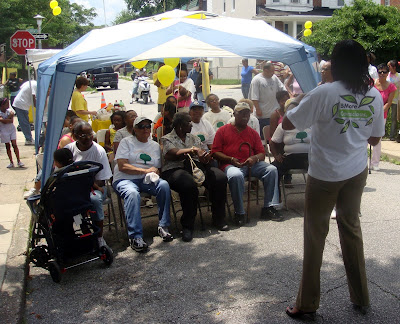 All the standard fun that accompanies a neighborhood block party was also on display last Saturday. Two barbecue grills pumped out toasty hot dogs for all. The kids (as well as some adults) got sugar overloads from fruity ice pops. Residents of Richnor Springs enjoyed the opportunity to socialize with each other and listen to music and, despite forecasts to the contrary, the seemingly constant rain of the past month was nowhere to be seen on Saturday. Kudos to Richnor Springs for hosting such a fun and informative event!