Biking in Baltimore: Part I

Heroes in Our Midst: Ted Smith

TiVo the Ravens game on Sunday and join us for north central Baltimore’s biggest bike ride: the Tour de Greater Homewood! This year’s ride will honor fallen cyclist and former GHCC Board of Directors member Jack Yates, who was killed in a cycling accident in August. To gear up for the big ride this Sunday, we’re featuring some guest writers representing Baltimore’s bike scene. To learn more about the Tour de Greater Homewood, visit our website or check out the event on Facebook. 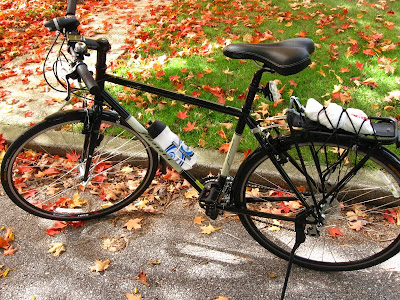 Greater Homewood is a great place to cycle!

What makes Greater Homewood’s 48 neighborhoods a great place to ride your bike?

Greater Homewood has increasingly great bike infrastructure. As you may have read in Nate Evans’ post, Baltimore City is doing a lot to make this city a safer and easier place to ride a bike for transportation. There are signs reminding autos to “share the road,” bike route markers or “sharrows” and dedicated bike lanes. As you may have noticed, a lot of this good work gets done in Greater Homewood, since much of the area is a major north-south bike route, bringing folks from the county to midtown and downtown. If riding your bike in traffic makes you nervous, perhaps the infrastructure in place and the new bike routes and bike lanes in the works might entice you to put feet to pedals and wheels to asphalt.

Greater Homewood has great hills! Anyone will tell you that riding your bike down a nice, long hill is one of the most exhilarating experiences of cycling. I mean, environmental, social and fitness reasons aside, isn’t the main reason most of us choose to ride our bikes around Baltimore because it’s just plain fun? Still, what goes down must come up, right? Well, nothing builds character like cycling straight up Charles Street or University Parkway on a chilly morning. Nothing.

Greater Homewood has, most of all, incredible diversity in our swath of north central Baltimore City. There are tree-lined parkways, blocks of historic rowhomes, large apartment buildings, green spaces, main streets, and public green spaces. There are truly folks from all income levels, all ethic backgrounds, all religious affiliations. Greater Homewood represents the diversity of Baltimore City itself, both in the terrain and the people who call these neighborhoods home.

Riding your bike on new bike lanes, winding down a steep hill, on your way to pick up a new bell for your bike and doing it all while experiencing the myriad venues and faces that Greater Homewood has to offer, why wouldn’t you want to ride you bike in Greater Homewood?