Biking in Baltimore: Part I

TiVo the Ravens game on Sunday and join us for north central Baltimore’s biggest bike ride: the Tour de Greater Homewood! This year’s ride will honor fallen cyclist and former GHCC Board of Directors member Jack Yates, who was killed in a cycling accident in August. To gear up for the big ride this Sunday, we’re featuring some guest writers representing Baltimore’s bike scene. To learn more about the Tour de Greater Homewood, visit our website or check out the event on Facebook.

Baltimore can be one of the hardest cities to bike in. From angry drivers to bad pavement, old streetcar rails and wheel-eating storm grates, cyclists have many obstacles to overcome to reach a destination safely. Despite the challenges, Baltimore is becoming an easier place to ride.

With the Bicycle Master Plan of 2006, the city now has guidelines and goals to improve bike infrastructure and safety. The city’s first major bike project was the Collegetown Bike Network, which installed bike lanes, sharrows, and signed routes connecting the colleges of central Baltimore. Expansion of the bike network continues with Operation Orange Cone, the city’s street resurfacing program, by bringing bike lanes to Park Heights, Hanover St., and Loch Raven Blvd. The city maintains a free bike rack program that has installed some 200 racks, including the city’s first on-street bike parking in Charles Village .

Aside from new infrastructure, more events and information are available to help citizens discover biking. The new Bike Baltimore website is a one-stop shop for cycling in Baltimore, complete with news updates, detailed description of bike facilities, route information, and a list of biking groups and bike shops around town. The Baltimore Metropolitan Council published the Bicycle Commuter Guide, which lays out all the information necessary to transition to cycle commuting. Along with the annual Bike To Work Day celebration, Baltimore ’s Department of Transportation hosted the Bike Blast, which brought together local shops and advocates to promote biking with guided bike rides. The Bike Summit was a day long event to envision just how big biking could be in town, hearing from residents and learning from Chicago ’s example.

While we’ve come a long way, we still have a long way to go to normalize cycling in Baltimore. Along with two new bike networks in Southeast and Park Heights, new sections of the Jones Falls Trail are scheduled for construction beginning next year. A bike safety campaign will be promoted by the city and new policies promoting cycling are in the works. No doubt this is an exciting time to be on two-wheels in B’more! 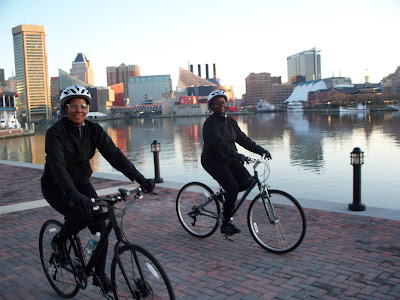